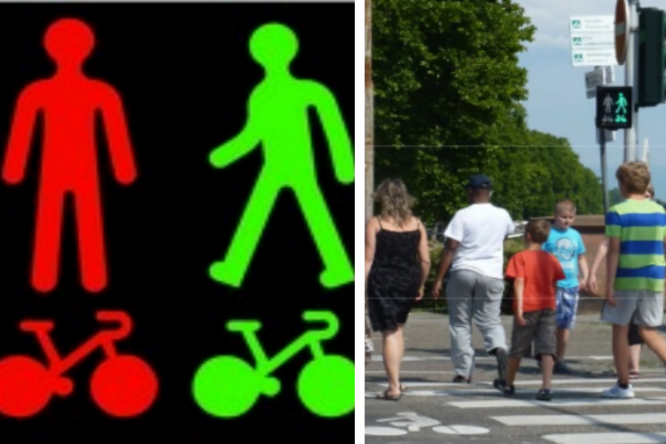 A new type of traffic light is being rolled out across France to remind cyclists and pedestrians to obey traffic laws and improve safety. It comes after cyclist deaths quadrupled in two years.

Lights will be used when a bike lane is next to a pedestrian path. They include both the symbol of a “walking man” (like traditional crosswalks) and the bicycle symbol for cyclists.

New signs will also indicate how long pedestrians must wait before crossing and how much time they have to cross before the lights change again.

The road safety agency, Sécuritéroute, unveiled the new design of the signs and lights in the Official Journal of July 5th. The new system will be incorporated into the official Highway Code.

The decree states that the new signs and traffic lights will make it easier for pedestrians to pass through dedicated crossings and encourage cyclists to move out of the way.

The new signs and lights have been successfully tested in Strasbourg, Vannes and Neuilly-sur-Seine, where pedestrians have welcomed their introduction. Half of the pedestrians questioned declared that the signs encourage them to change their behavior and to respect the rules of passage.

It comes as cyclist fatalities quadrupled in May this year compared to May 2019, totaling 22 to six.

The decree also provides for new signs reminding motorists of the safety distances required between vehicles in tunnels. The system has been successfully tested in the Foix tunnel in Ariège.

Deadly intersection of Argyle Forest to get a traffic light, according to the city – 104.5 WOKV