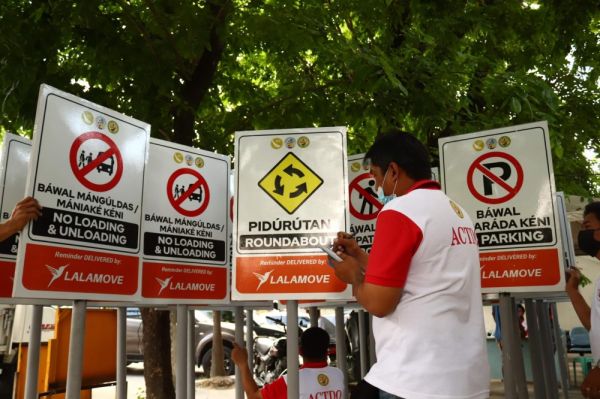 Here are some of the additional innovative road signs in Kapampangan that the Angeles City government led by Mayor Carmelo “Pogi” Lazatin Jr. will install on major Angeles City thoroughfares, including MacArthur Highway and Fil- Am Friendship Circumferential Road.

On Tuesday, March 15, 2022, the City of Angeles Traffic Development Office received a donation of Kapampangan traffic signs from Lalamove to bolster city government efforts to preserve and revitalize the native language while maintaining the safety of pedestrians and motorists.

In 2021, the municipal government initially installed 20 Kapampangan traffic signs on major roads. These were installed alongside the existing English language signs by members of the Angeles City Office of Tourism in cooperation with the Angeles City Traffic Development Office.

The move is the first in the city, as well as in the entire province of Pampanga, in accordance with a city ordinance establishing Kapampangan as the official language of the city of Angeles and institutionalizing its use in all sectors, alongside the national languages ​​and existing official. (JTD)

SunStar’s website encourages friendly debate, but comments posted on this site do not necessarily reflect the views of the management of SunStar and its affiliates. SunStar reserves the right to delete, reproduce or edit comments posted here without notice. Inappropriate messages will be automatically deleted.

Don’t use profanity. Some words have been banned. Stick to the subject. Do not stray from the discussion. Be consistent. Don’t shout and don’t use CAPS!