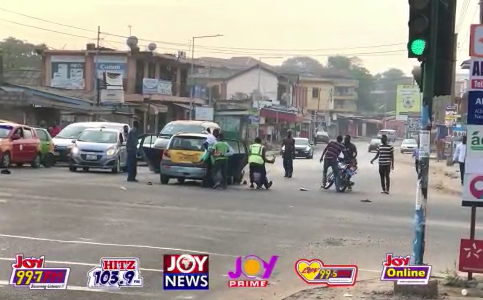 An unidentified motorcyclist at 8am on Tuesday morning collided with a sedan at the traffic intersection near the Multimedia Group premises.

Eyewitnesses said the accident was caused by the impatience of the two motorists as they approached the traffic light on the Accra Newtown-Faanofaa road.

In a video captured by JoyNews, the biker was seen on the ground showing signs of distress. He was then carried into the sedan by eyewitnesses and transported to the nearest health center for treatment.

The latest data from the Motor Traffic and Transport Department (MTTD) of the Ghana Police Service has confirmed that 232 lives perished in road accidents in January this year.

A total of 972 vehicles were involved in various accidents resulting in 1,237 injuries.

The MTTD recorded 461 motorcycle accidents which left 93 dead and 362 injured.

Additionally, a total of 707 commercial vehicles were involved in these accidents, resulting in 95 fatalities and 620 injuries.

The Ashanti region is again in the lead with 308 injured and 44 people have died so far. Next comes the Greater Accra region with 31 dead and 186 injured.

Meanwhile, Parliament is pushing for a national conversation on how to deal with the rise in road accidents in the country, which have claimed several lives.

As part of efforts to reduce road carnage, JoyNews continues its #DriveSafeCampaign.