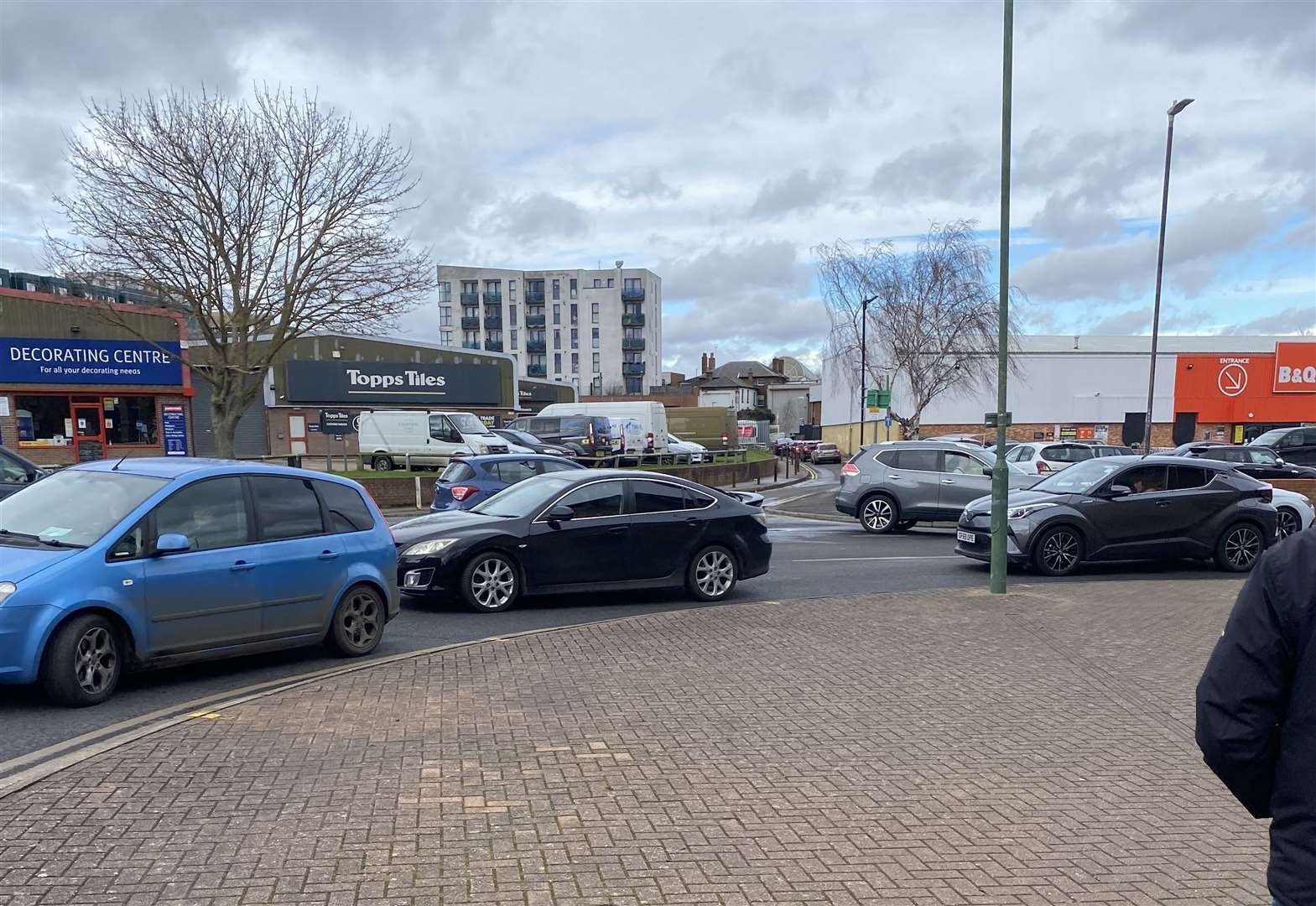 A proposed one-way system for a traffic blackout in Maidstone, which again saw drivers stuck in two-hour queues at the weekend, could be in place by the end of June.

Cllr Paul Harper (Lab) who proposed the system for Barker Road and Hart Street in 2020 says now is the time to act after receiving complaints about the traffic situation.

Last weekend, a combination of an accident along Tonbridge Road and problems with traffic light timings, saw queues pile up.

The two roads serve hundreds of apartments, the Lockmeadow complex, which has recently had a £900,000 food hall added, and McDonald’s drive-thru.

Maidstone advisers at the Joint Transportation Board opted for the one-way system as a quick fix to improve the situation.

This would mean that vehicles would no longer turn right to reach McDonald’s drive-thru and a mini roundabout would be installed near B&Q, to keep traffic on a one-way route.

Cllr Harper said: ‘It’s a pragmatic proposal, it won’t cure everything but should make life better. It can also be set up, we are promised, in less than six months, so by the summer. Alternatives would have meant no action for three or four years.

Christopher Glue’s family took more than two hours to get home after going out to walk their dogs in Maidstone.

As they left the Lockmeadow car park at 4.45pm on Saturday, they encountered unusual traffic along Barker Road and Hart Street, which leads to the McDonald’s drive-thru.

Christopher said: ‘At first I thought it was roadworks but by the time they got to the traffic lights near McDonald’s they saw he was only letting three cars out at a time.

“When my family came to the front of the queue, people were fighting to get out.”

In January, an “informal” meeting was held online with members of the Maidstone Joint Transportation Board.

A Kent County Council (KCC) spokesperson said: “KCC will implement the proposals recommended by the Joint Transportation Board, for a one-way trial on Barker Road and Hart Street this summer.

Drivers were stranded for hours last weekend after the traffic light system let “only three cars out at a time” on the A20.

Christopher Glue’s family took more than two hours to get home after going out to walk their dogs in Maidstone.

As they left the Lockmeadow car park at 4.45pm, they encountered unusual traffic along Barker Road and Hart Street, which leads to the McDonald’s drive-thru.

Mr Glue said: ‘At first I thought it was road works but by the time they got to the traffic lights near McDonald’s they saw he was only letting three cars out at that time.

“When my family got to the front of the queue, people were fighting to get out, both on their side and on the road leading to the McDonald’s drive-thru.

“Fortunately there were no children in our car at the time, as there normally would have been!”

Kent County Council (KCC) Motorways tweeted around 4pm that there had been an accident along the A26 Tonbridge road which was causing delays.

The traffic was then cleared.

Lucy George, who lives in Hart Street, said: “It’s more than a joke now. Every weekend, without fail, there’s traffic and nothing moves.

“It’s very frustrating because of the number of houses in my route – if someone wanted emergency services they wouldn’t have a chance of getting to where they needed to be.”

The stretch of road outside Lockmeadow has already been the subject of complaints.

In 2018 angry drivers took to Twitter after being blocked for hours.

Similar queues in the area that happened last month have had a ripple effect on food company Notorious BRG, which has a place in Lockmeadow’s new food hall.

In a Facebook post, they said: ‘We have closed Deliveroo in Maidstone today as there is currently an hour wait to exit Lockmeadow due to traffic on the one-way system.

One-way traffic system in Chester city center should be made permanent, petition says