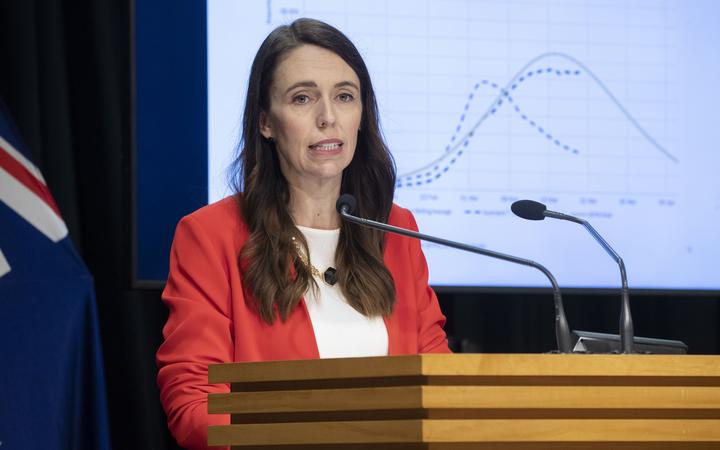 Prime Minister Jacinda Ardern has revealed Cabinet decisions on when and how Covid-19 restrictions will be eased.

However, she says things have changed since the system was introduced: we’re now dealing with Omicron, rather than Delta; we now have more data and are better able to identify high-risk environments; and we have high immunization coverage rates.

With that in mind, Ardern says she is announcing that all outdoor gathering limits will be removed from the traffic light system.

She says indoor gathering limits will drop from 100 to 200 under the red light setting.

Ardern says the data shows that hospitality had a relatively low secondary attack rate of 6.7%, which is confirmed by other research.

She says it is the view of public health officials that hospitality gathering limits can be increased in the red frame from 100 to 200 without having a significant impact on the health system, particularly in keeping the rules seated and separate.

She also announces that vaccine passes will no longer be required from 11:59 p.m. on April 4.

Businesses and events will still be able to use them, if they wish, but they will no longer be mandatory, she says.

Ardern says masks are vital, and although people don’t like them – for good reason – a British Medical Journal study late last year showed that wearing a mask reduced new cases by 53%.

In Orange, outdoor events will also be unlimited. Close contact is a higher risk for indoor events, however, organizers of events larger than 500 people are encouraged to add additional capacity or provide seating.

Green will have no restrictions but there will be guidance and will not change.

“These changes are based on the best available evidence that we currently have in real time. We believe they will make the Covid protection framework easier to maintain while remaining highly effective,” Ardern said.

She says the changes can be made almost immediately and will take effect at 11:59 p.m. on March 25.

The next review of traffic light settings and country configuration will take place on April 4.

Regarding mandates and vaccine passes, Ardern says she was not initially in favor of their use, but after months of Delta it became clear that mandates were needed to achieve required vaccination levels. for a safe reopening, and passes also had a role to play.

She says that’s definitely one of the reasons we reached 95% of the eligible population vaccinated and near elimination of Delta over the summer, but Omicron turned things around.

Almost all of New Zealand’s more than 500,000 Covid-19 cases have been in the Omicron wave, she says. Many cases do not show symptoms and testing does not detect all cases, so modellers expect the total number of cases may now reach 1.7 million.

For the unvaccinated, the disease can be serious, she says.

Ardern says these people will have built up some immunity to the disease itself, and as we descend from the top the need for passes changes.

Regarding QR codes, she says it is not expected that we will contact the trace more widely, with the exception of high-risk environments like aged care facilities or residential facilities for vulnerable people.

Ardern says companies should be ready to put QR codes back in place and people shouldn’t delete the app from their phones just yet, in the event of a new variant that evades vaccines or is more deadly, to which case contact tracing would again play a more critical role. .

“Digitization has been a very important part of what we have achieved, so thank you all for playing your part.”

Finally, the Cabinet also considered the role of vaccine mandates. As rates rose, they sought advice from Professor David Skegg, who said the pros and cons were now more finely balanced.

Skegg said: “Due to our relatively high vaccination coverage and the increase in natural immunity as well as the apparent decline in efficacy of the Omicron variant vaccine, while vaccination remains of critical importance to protect New Zealanders from Covid-19, we believe that several of the vaccine mandates could be dropped once the peak of Omicron passes.”

The government will no longer require warrants for education, police and defense personnel and businesses operating vaccine passes from 11:59 p.m. on April 4. They will continue to be used by healthcare, aged care, prison staff and border and MIQ workers.

Ardern says the government has also asked whether mandates in the health sector could be restricted and expects to provide more updates on advice to the private sector on their wider use.

However, she calls for people to still be vaccinated and strengthened, saying this will continue to be central to the stability and strength of New Zealand’s recovery.

Ardern says that after two long years of living in a pandemic, it’s easy to lose sight of how far New Zealand has come.

“On this very day, two years ago, Chief Health Officer Ashley Bloomfield announced from above to the Department of Health that we had 36 new cases of Covid-19. Half at the time were from of overseas travel except for Queenstown World Hereford Livestock Conference … we could contact 50 new cases a day at the time We hadn’t locked down yet, but early signs were there.

She says two new community cases were announced on March 23, 2020, one in Wairarapa unrelated to the border.

Within days, New Zealand was locked in domestically, a decision that Ardern said was not difficult.

“We had no other defence, no other way to protect each other. There was no vaccine, no antiviral drugs, there was very little data to tell us what restrictions public health worked and which didn’t, so we built our own defenses and hunkered down.”

The transition wasn’t easy, but it worked, she says. New Zealand succeeded in eliminating the first wave and recorded the lowest number of deaths in the OECD for two consecutive years.

She says the response was also the best economic response, but although we were successful “it was also very difficult… everyone had to give up something to make it work and some more than others”.

She says she imagines each family will have had a difficult conversation about vaccines, mandates or passes but among the different opinions there is also fatigue.

Ardern says we are now able to continue moving forward safely, but we must keep in mind that Covid is here to stay.

Ardern says that for most people the symptoms are now minor and they have recovered well at home, but for others less able to fight off the virus it meant a threat to their lives. Experts believe the number of cases has peaked in Auckland now, with the rest of the country expected to follow within the next two weeks.

She says after the peak, we will fall back to a stable baseline of several thousand cases per day, and there will likely be peaks, especially during the winter.

“We need to continue to use tools that can keep our vulnerable community safe, like immunocompromised people and people with disabilities…there are ways to do that while still moving forward.”

When asked why now, and if the political pressure is increasing too much, Ardern says we now have a clearer idea of ​​when the peak is, and therefore have the ability to give dates.

She says the government only ever did the things that were necessary to get us through the pandemic as safely as possible, “and they worked”.

“I know it’s been difficult, but I absolutely stand by the decisions we had to make.”

Ardern says this is not the beginning of the end of Covid. He stays with us and will be for a while yet, she said.

“We’re making evidence-based changes to make it easier to live with and basically to help keep us going through it as safely and as well as possible.”

She does not believe the changes will embolden those who protested in Parliament.

“I’ve made it clear here in this playhouse that when we get to the point where we remove passes and make changes to mandates, it will be because it’s safe to do so, not because someone “One happened on the lawn of Parliament. And you can see by the data we present today that’s exactly what we did.”

We can now see from a body of evidence that it is safe to be outdoors, she says.

The Cabinet has sought advice on vaccination mandates, passes, the traffic light system and any Covid-19 restrictions now that New Zealand appears to be approaching or past the peak of Omicron cases, and made decisions at its meeting on Monday.