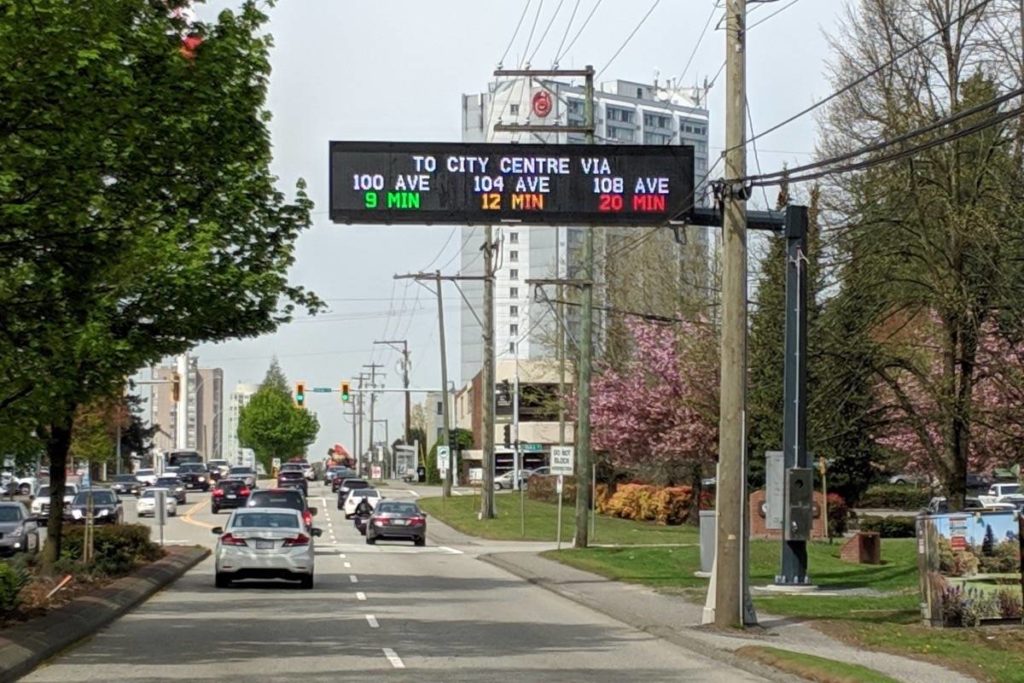 Three signs in the northwest of the city will help motorists decide which routes to take to get to Surrey city centre.

The City of Surrey on Tuesday (December 3rd) launched its three Advanced Traveler Information System (ATIS) panels, which aim to help drivers “make more informed decisions to improve their journey, reduce the environmental impact of driving and reduce driver frustration,” according to a city statement.

The three color signs heard “are located to provide adjacent route choices for downtown drivers arriving from Interstate 1 to the north and Interstate 99 to the south.”

The panels are located at:

The report states that “Due to the downtown’s expected residential and employment growth and its emergence as the region’s second-largest downtown, the route for all DMS (Dynamic Message Signs) has been chosen to be the city centre”.

The panels, according to the city, display travel times from data collected and analyzed from 50 Bluetooth sensors installed in 2018 at selected traffic lights in the northwest of the city.

ATIS detects Bluetooth devices, encrypts the data, and routes it to the traffic management center, “where a computer tracks the speed and travel time of detected devices as they move through the city.”

“A comparison of real-time speeds with historical speeds alerts staff when road links are moving slower than normal, and traffic lights are then adjusted and the public are alerted to changing traffic conditions,” says the press release.

This new system is supported by TMC traffic engineers and technologists who actively manage more than 2,500 traffic devices in approximately 316 square kilometers of urban space.

The ATIS will fully integrate with other city systems, including the proprietary wireless radio communications system, nearly 500 traffic cameras and more than 410 networked traffic lights to improve safety and travel times, according to the press release.

The ATIS project, which cost $1.5 million, will be shared equally between the City of Surrey and Transport Canada.

A business report Transport Canada’s share comes from its Asia-Pacific Gateway Corridor Infrastructure Fund “for the implementation of an innovative and state-of-the-art ATIS to improve the movement of goods and people in Surrey”.

The city’s share, according to the report, comes from the 2018 and 2019 transport budget. Costs for maintaining and operating the system have been included in the 2020 financial plan.

Jaime Boan, the city’s director of transportation, said the project’s original budget was $1.84 million, so the project is “well under budget.”

As for ongoing operating and maintenance costs, Boan said that remains to be determined.

“We don’t expect it to cost a lot in the first few years. As it ages, obviously we have to plan for its replacement,” Boan said, adding that staff expect the panels to last at least 10 years.

At the time, the city said it hoped the signs would be in service “by spring.”

Boan said that since it was “state of the art” technology, staff had to make sure everything “worked perfectly”.

“There were a few issues along the way, which took a little longer than expected,” he said.