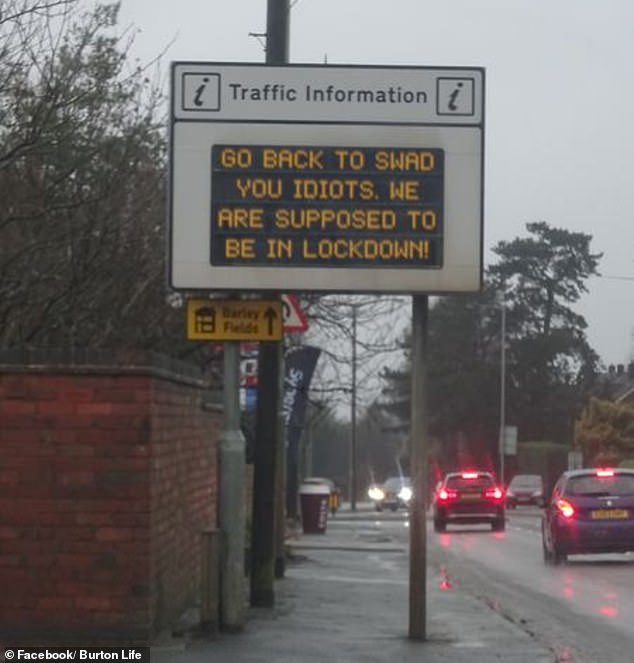 By Milly Vincent For Mailonline

Mystery surrounds several photos of a traffic screen that appears to have been hacked in Staffordshire, with the sign telling people to come home and reminding them ‘we’re supposed to be locked up’.

The electronic card was reportedly the victim of a cyberattack on the Burton-on-Trent traffic system that took place on Sunday afternoon, displaying the “unacceptable” messages.

A picture on the electronic board shows him posting a message to residents of the nearby town of Swadlincote, saying, “Go back to Swad, you idiots. We’re supposed to be on lockdown! ”

A spokesperson for the Staffordshire Council said they did not think it was possible that the signs were hacked, saying: “The signs are not functional and have not been for some time.”

The first post that was reportedly posted on the sign prompted a complaint from Karen Banks, of Swadlincote, to the Burton Life facebook group, who said the signs were “100% unacceptable” before removing her post.

Ms Banks wrote: “Nice welcome on my way to Burton this morning (note: sarcasm). It is getting ridiculous now and the people responsible should be fired immediately.

“It is 100% unacceptable. I lodged my complaint with your council ‘, Burton News reports.

Later that evening, a photo appeared of the sign that had changed in response to Ms Bank’s complaint, stating, “Do you want to speak to a manager Karen?”

The sign still posted the message at 7:30 p.m. Sunday, with a council source telling Burton News that steps were being taken to prevent further messages from appearing from the hacker. 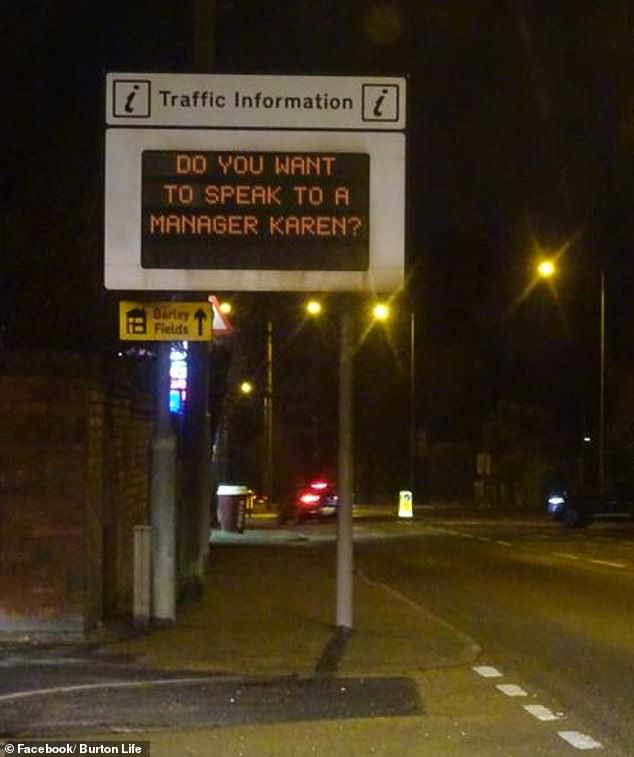 Later that evening, the sign changed in response to Ms Bank’s complaint, saying, “Do you want to speak to a manager, Karen?” “

The locals said Burton News that they had witnessed the sign, despite counsel denying that a hack had taken place.

A local hacker by the name of W1nsh1ll_Ph33rl0rd told the post: “Basically everything is pretty easy to do no matter what the board thinks the board is on while you can do it yourself just by having a lamppost key. and a laptop.

Social media users were quick to congratulate the “hacker” behind the panels of a local Facebook group, suggesting they should be given a job on the council.

Ruth Bowman wrote: “I actually think it will do the freeways a favor. The majority of people walk past these signs barely looking at them … at least now people will be looking at them for messages, suggestions, etc. lol ‘.

Ian Inchley wrote: “If and when you find this hacker despicable, offer him a job and nominate him for a Nobel Prize! It’s time for the signs to be really informative!

While Karen Payne, responding to the complaint filed by Ms Banks, added: “She did Karen a disservice over there.”

Beckie Moran wrote: “No comment on what the lady said, but I have to admit I don’t like how a name started to be used as a description of a mean person in general.

“This sign is awesome, we all need to laugh. Hope she’s feeling less cranky today.