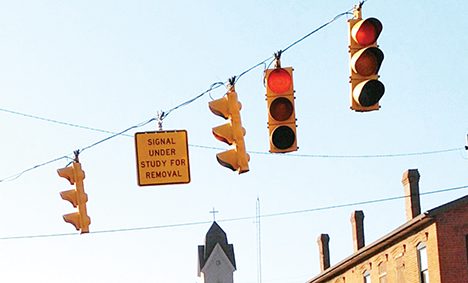 The City of London plans to remove five traffic lights around the city. The first stage is a 90 day trial period. The process began on August 24.

The traffic lights scheduled to be removed are located at the following intersections:

The street department hangs signs next to lights at these intersections that read “Signal under consideration for removal”. The signs will remain in place for 90 days during which time activity at these intersections will be monitored. The data will determine whether the lights stay or go, said Bill Long, street superintendent.

During the 90 day period, the lights will flash yellow on High and Main streets. They will flash red on Westmoor, Union, Oak, Second and Fourth. In addition, the street service is installing stop signs on these four side streets.

In addition to removing some traffic lights, the city plans to replace all other traffic lights in the city with new, brighter and more efficient LED units. The Streets Department has issued a Request for Proposals (RFP) for the purchase of the new lights and is working on an RFP for the installation work. Long said he hopes to put the two contracts up against each other soon.

Kevin Gaverick, a resident of London’s North Madison Road, spoke to City Council on August 19 about flooding on his property and neighboring properties.

“It gets worse. It happens more often,” he said.

“I can tell you this is something that does not fall on deaf ears,” Mayor Patrick Closser told Gaverick. “We have an aging infrastructure. I would say that we spent more money in the last five years than in the previous 20 years on storm sewers (repairs and upgrades).

Closer said city leaders have some ideas on how to address the flooding issues. One is a quick fix and the other is a bigger project, he said.

“People like to call them century-old floods, but we have them about every year or more. We are looking at that,” he added.

Council member Josh Peters suggested Gaverick consider installing a backwater valve, a device that prevents stormwater from flowing back into the home.

Rex Henry, director of the city’s security services, said he encountered the same problems when living on Westmoor Drive. He installed a check valve.

“It helped me in my situation,” he said.

Closser noted that city code now requires the installation of backflow preventers in all new homes.

During the business portion of the August 19 meeting, the board:

The next regular council meeting is scheduled for September 2 at 7:00 p.m. at City Hall.