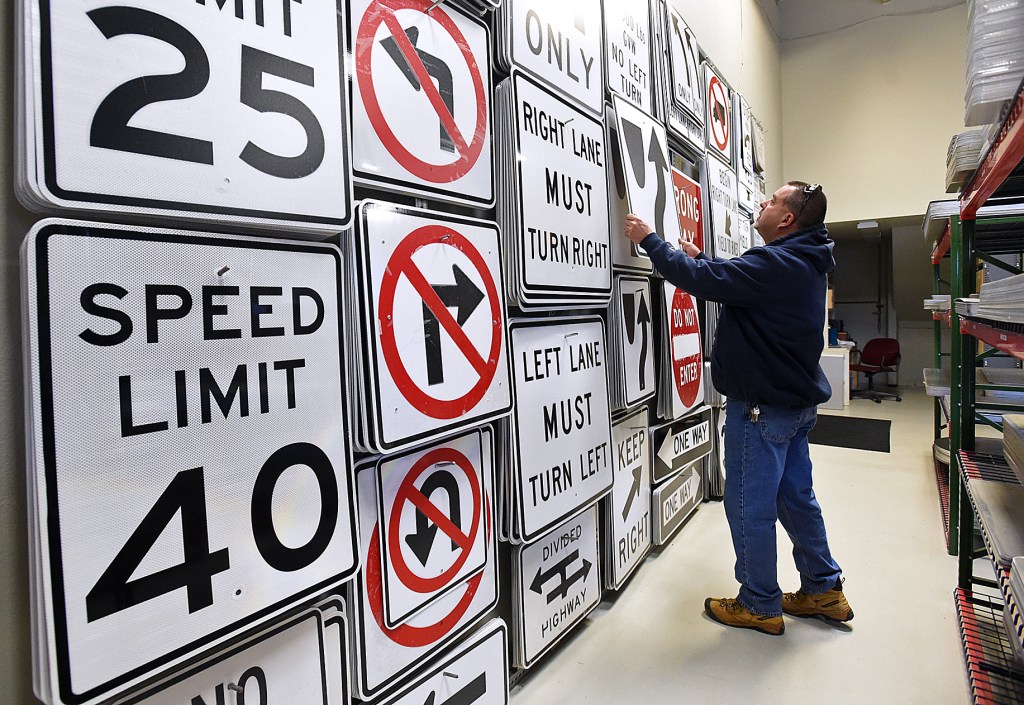 About 27,000 traffic signs line Loveland’s highways and back roads, according to the town’s traffic sign crew supervisor, Stephen Zuschneid.

Most of them were done in-house at the Loveland Maintenance Operations Center by Zuschneid and traffic tech Matt Strom.

The walls of the City Sign Shop at West Fifth Street and Railroad Avenue are tiled with a variety of road signs, all highly reflective, with fonts scaled according to the speed limits of the roads where they are supposed to be installed.

Zuschneid, who has run the town’s sign store for more than 20 years, said he was originally hired to set up the facility, and he visited those in nearby communities to get ideas. .

He said most major cities, including Fort Collins, Longmont and Greeley, have sign shops to reduce the costs and delays associated with ordering signage.

All signs start with pre-cut pieces of aluminum and rolls of 3M reflective sheeting. Diamond Grade sheets are used for higher priority signs, such as stop signs, and lower cost High Intensity Prismatic sheets for other signs, such as no parking signs.

Once a panel design has been entered into a computer, the design is cut from the sheet using a machine known as a plotter. Sign makers then remove the excess foil by hand in a process called weeding, and the design is applied to the aluminum and any base foil.

Once all the layers of foil are in place, they are pressed onto the metal using a mechanical roller, and the finished sign is ready to use.

Zuschneid said the store makes about 1,300 new signs each year using this method and replaces about as many.

He added that the city hopes to get 10 to 12 years of life from its signs, all of which have been photographed and logged into a GIS database.

The most commonly damaged signs are the “Keep Right” signs, Zuschneid said. Unlike other signs, they are often placed on the roadway, and the most common cause of “Keep Right” accidents is collisions with cars.

“A lot of times people don’t stay on the straight and narrow and just plow through everything,” he said.

Although snow and ice can cause slippery driving conditions, Zuschneid says he sees “no rhyme or reason” for the amount of downed or damaged signs the city recovers after storms, including those that drivers of snow plows do not notice.

“Sometimes there will be a big storm, and we will find one, and sometimes we will have a light dusting of snow, and there will be 10,” he said.

Zuschneid said typos are rare because most of the signs they print are the same signs they’ve been printing for decades.

When asked if the store had ever made custom signs, he admitted that they had made special signs when employees retired.

However, most of the time the store is busy enough.

“We’ve done a few things here and there, but it’s rare,” he said. “Most of the time it’s just old signs like these.”