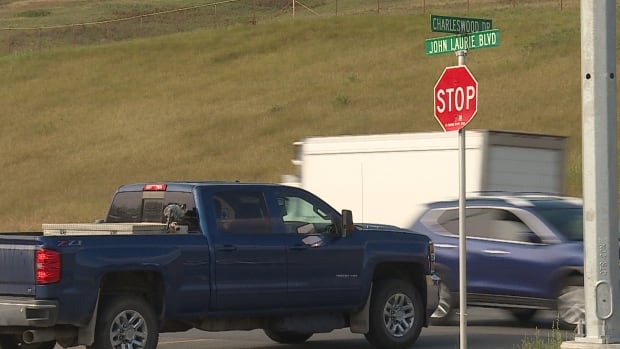 Changes are coming to John Laurie Boulevard, and the city hopes the new traffic calming measures will reduce collisions along the main road in northwest Calgary.

Pat Grisak, the city’s mobility management coordinator, said the city is adding a traffic light on John Laurie at the Charleswood Drive intersection.

Additionally, no left turns on John Laurie will be permitted from 19th Street or Brisebois Drive NW during weekday morning and afternoon rush hours. This includes vehicles exiting the Nose Hill Park parking lot across from Brisebois Parkway.

Grisak said the changes are being made to avoid collisions and injuries.

“It’s time we did something about this, to address the security issues that exist,” he said.

About 42,000 vehicles travel daily on John Laurie Boulevard between 19th Street and Brisebois Drive, according to the city. Grisak said the Charleswood intersection has the most concerning collision history along the road.

Since 2015, there have been 90 collisions in Charleswood and John Laurie. According to the city, 19 of these collisions, or 21%, resulted in injuries. The citywide average for injury crashes at intersections is 10%.

Grisak said a traffic light is the best method to reduce crashes in Charleswood and John Laurie, but that solution adds the potential for rear-end collisions when vehicles come to a stop.

“What we’re going to do is put up turn signals on John Laurie Blvd before the [traffic] signal at Charleswood Drive to indicate to motorists either that the signal is about to change or that it is red and they should stop,” he said.

Grisak said rear-end collisions that occur at traffic lights are generally less severe than the injury-causing crashes the city has seen at the intersection.

But not all local residents are convinced that the traffic light is a good idea.

Edgemont’s Shelley Ervin said she supported restricting left turns to John Laurie, but was concerned about collisions that could occur at the Charleswood traffic light in winter.

“I’m really concerned about the possibility of ramming other vehicles because they will slide into vehicles that are stopped at the bottom of the hill,” she said.

In addition to installing turn signals in front of Charleswood, Grisak said the city will put up signs at 19th Street and Brisebois Drive ahead of the changes to warn drivers of upcoming left-turn restrictions.

“We will monitor compliance with signage, and if there are difficulties, we may consider other measures,” he said.

Grisak said drivers will still be able to turn left onto John Laurie from Charleswood during rush hour.

Modifications to John Laurie Boulevard are expected to be completed by the end of October.

Are the “new” traffic light rules too complicated? Chinese netizens discover they may have misread the guide