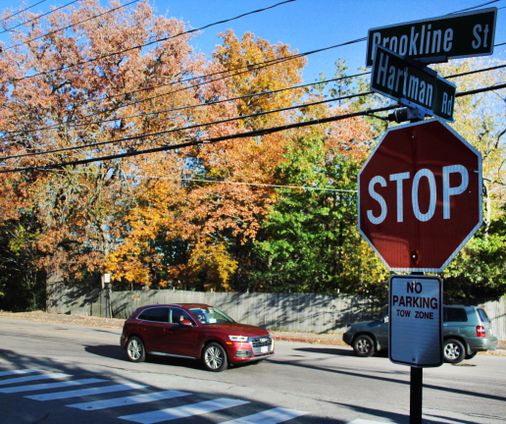 “When you’re a parent you want your kids to be a little more independent,” she said. “But when you live in such a dangerous place, which almost looks like a freeway, you can’t really give them that independence because you just don’t have the basic safety to let them wander around.”

Since 2016, there have been eight collisions involving cars at the intersection, including three with other vehicles, one with a cyclist and one with a pedestrian, according to data from the Massachusetts Department of Transportation. In January 2020, a car struck a crossing guard at the intersection. This, along with another incident near an elementary school, prompted the mayor to educate residents about pedestrian safety in Newton.

The petition has more than 300 signatures and Hariskov said other members of the community have supported efforts to increase the safety of the school, which has nearly 500 students.

“We tried to get the attention of the city,” Hariskov said. “No one is really helping.”

In an emailed statement, Newton Transportation Director Jason Sobel said the city was aware of the petition for a pedestrian traffic light and had made several changes around the school to increase safety for pedestrians, including the school zone flashing at 20 miles per hour. two-way traffic lights on Brookline Street, speed signs and pavement markings in wide parts of the street to better define the lanes for drivers.

“The safety of pedestrians around schools is a very high priority for the city,” Sobel said in the statement.

Julie McDonough, communications director for Newton Public Schools, described in an email how Memorial Spaulding Principal Tom Morris encourages families to demand changes and voice their concerns through formal processes of the city. The city has an online form for accepting “traffic calming” requests.

Sobel said in the statement that the city will consider potential options for additional safety measures on Brookline Street after issuing a memorandum this winter summarizing the community’s demands for traffic calming improvements on Newton’s streets.

Ashley Garcia, another parent of Memorial Spaulding students, said she believes if the city does not improve safety measures outside the school, more people could be injured.

“There are a lot of times that myself and my kids with a crossing guard have almost been hit,” Garcia said. “Crossing that Brookline Street is so dangerous. Nobody stops.

Garcia said she believes a new traffic light could bring a sense of security when crossing the street.

“The light will flash,” she said. “The cars will stop.”

Kearney said adding something like an elevated crosswalk could be beneficial for the area, especially given the average annual daily traffic of nearly 8,000 vehicles in this area of ​​Brookline Street, according to data from MassDOT road inventory.

“It’s an artery where people use it to cross different areas, which makes it a fast moving street,” he said. “There are no conflicts around. It’s not like there is parking in this section. So they really have a lot of width to work with.

For Rabbi Mendy Uminer of the Chabad Center in Chestnut Hill, the decision to add a push-button traffic light is “no brainer”. He said adding a traffic light would make everyone’s life safer.

“The Hartman intersection is crazy because cars are coming, and there’s a guard trying to pass the kids back and forth and direct traffic,” he said. “It’s not in the ability of a goalie to do everything that needs to be done in that corner.”

Uminer said he “absolutely” supports the petition because the whole effort is to protect children.

“When it comes to children, safety and the value of life, it’s never good to wait for disaster or something really sad to happen,” he said. “Why wait?”

Colbi Edmonds can be contacted at [email protected]