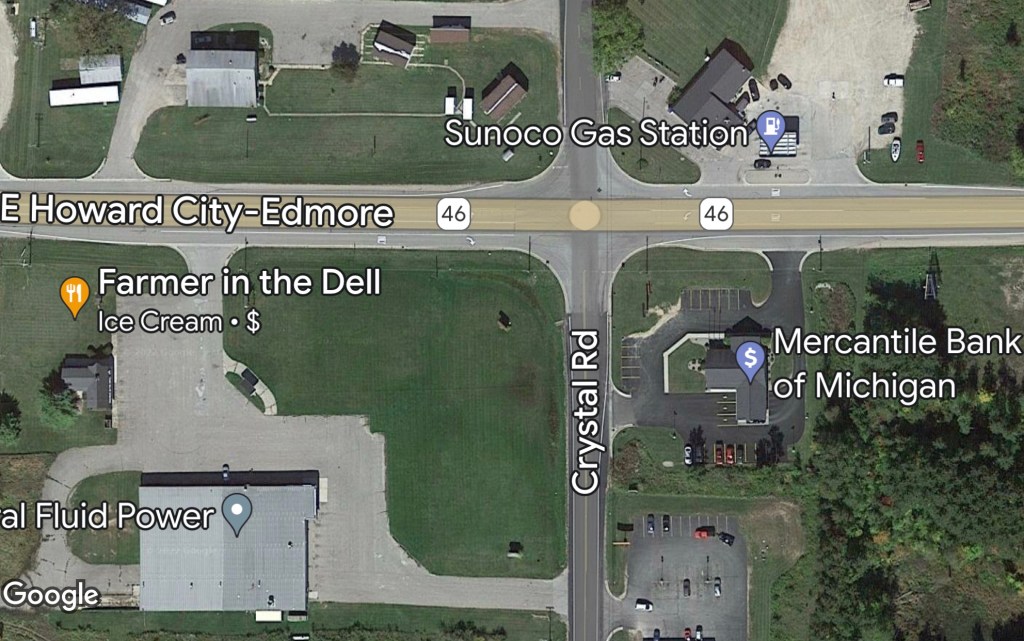 For several years, local residents have been lobbying the Michigan Department of Transportation to install a traffic light at the intersection of M-46 and Crystal Road near Vestaburg in Montcalm County due to the number of accidents serious traffic problems that occurred there.

So far, these efforts have been unsuccessful.

But that’s not stopping Ethan Hetherington from trying one more time after another traffic accident there earlier this month.

He created a Facebook page “Put a traffic light on the corner of M-46 and Crystal Road” via Change.com.

Hetherington hopes to get 5,000 signatures on a petition to be sent to MDOT asking for action.
“Too many accidents have happened at this intersection,” he wrote on his Facebook site.

“Something a simple traffic light can solve. Please sign this petition to make our community safer. It may take each of you to call MDOT to finally do it.

The intersection currently has a flashing signal with turning lanes in each direction on M-46.

Several businesses, including The Spot Party Store and a gas station, a Mercantile Bank branch, Farmer in the Dell ice cream shop, Leona’s Family Restaurant, and Dollar General are located at or near this corner.

“I would just like to say that I didn’t expect this to get the support it has so far,” he wrote. “All the more reason to prove that it is necessary. I have taken steps to email MDOT and send a request to speak to Governor Whtimer and am awaiting their response. Let’s get this over with.

During past efforts to obtain a traffic light at the intersection, MDOT said the location did not meet its standards for traffic volume or number of accidents to warrant a signal.

Many who commented said it was a “dangerous intersection” and that “too many accidents have happened there”.

Amanda Loomis, a worker at the Spot Party Store on the northeast corner of the intersection, posted, “Let’s keep going until it’s done. I work at this gas station and I don’t like seeing people I know get hurt. Too many of my friends and family have had an accident on this corner and I’ve also seen people crossing the stop sign.

Local resident Adam Marshall also led a petition in 2015 after a fatal traffic accident at the intersection, but went nowhere with MDOT.

“Yes, I worked hard a few years ago to get this done,” he wrote. “I spent the whole summer collecting signatures, going house to house, business to business, for people to sign it. I spoke with the Michigan Department of Transportation and their exact words were “there haven’t been enough accidents on this corner”.

Marshall went on to say that he “didn’t get anywhere” with the agency.

“Nothing was done,” he said. “Nothing will be done either. Our best bet is to talk to the governor.”

But Hetherington hopes to succeed where others have failed.

He urges those who want change to write to their state legislators and call the MDOT Transportation Service Center in Cadillac at 231-775-3487 to let their feelings about the intersection be known.