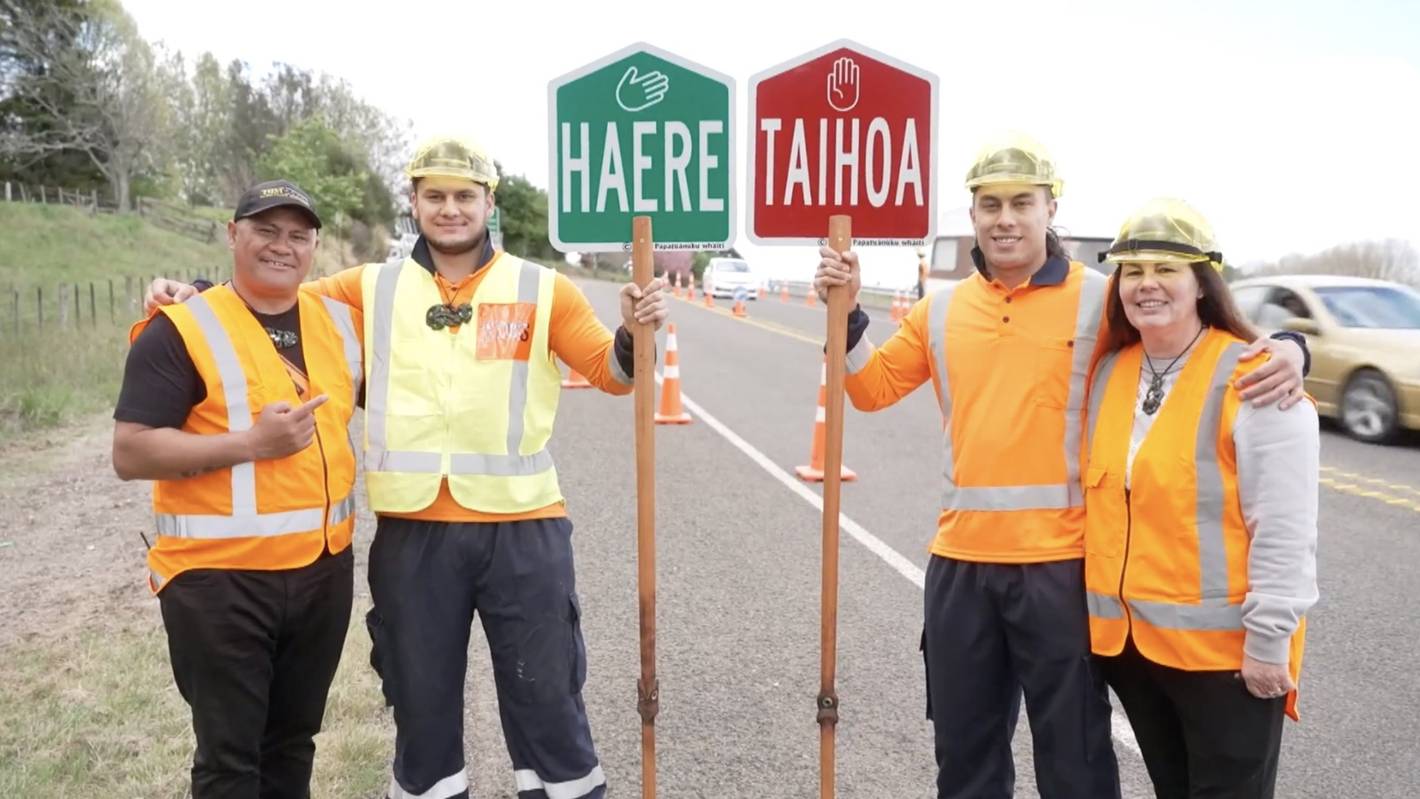 Bay of Plenty drivers between Te Teko and Awakeri witnessed the first use of the “Taihoa” (wait) and “Haere” (go) signs on their roads on Wednesday.

The idea came from a 30-year veteran of traffic management, David Taui (Te Arawa), who wanted Maori te reo to be used in his work environment to allow the language to develop and educate. the multitudes that would be led by road signs in te reo maori.

Although not yet cleared by the Waka Kotahi NZ transport agency, Taui decided to take a stand for the Maori language and opened a “30-minute window to try the signs”.

“We had the police arrested at our rākau and we have no opposition. No one showed up today and told us we can’t use them. We have a legal traffic management plan in place to be on this site on State Highway 30 Awakeri, right here, today, ”said enthusiast Taui.

This is not the first time that the English language on signage has been challenged, with the late Hawea Vercoe of Te Kura Kaupapa Māori o Rotoiti determined to have “Kura” on his buses in 2006 rather than “School”. He eventually won the support of the government of the day.

On Wednesday, Taui and his wife Mel set up a legal traffic management worksite to safely divert vehicles around arborists working on trees overhanging the roads.

One of those who worked with the team of arborists was Rangitane Harawira (Tūhoe and Ngāti Rongomaiwāhine), who often uses Taui and the team for traffic management when needed.

“There are non-Maori singers who have their songs translated into Maori. But translating and being used on road signs is new.

Dāmel Taui led the team with his tuakana, Wiremu Taui. The couple controlled traffic with the specially sculpted handle creating a pouwhenua (stake of strength and position) and a whare (head in the shape of a house with the words “Taihoa” and “Haere”).

Taui had a friend do the signs and, when completed, the pouwhenua were made and offered to the kaupapa.

“It was pretty good,” said Dāmel Taui. “No negative stuff, lots of waves, lots of smiles, I actually got a pūkana from a lady.”

Waka Kotahi NZ transport agency said it wants Maori te reo to be seen, spoken and heard wherever possible, in order to continue revitalizing the language.

Send your tips, story ideas and comments to [email protected]

“What is allowed on road signs is quite restricted in terms of wording and symbols.

“We accept that the current road sign rule does not reflect the aspirations of many people for Maori te reo and we want that to change,” Patena said.

This story first appeared on Te Ao – Māori News and has been reposted on Stuff with permission.