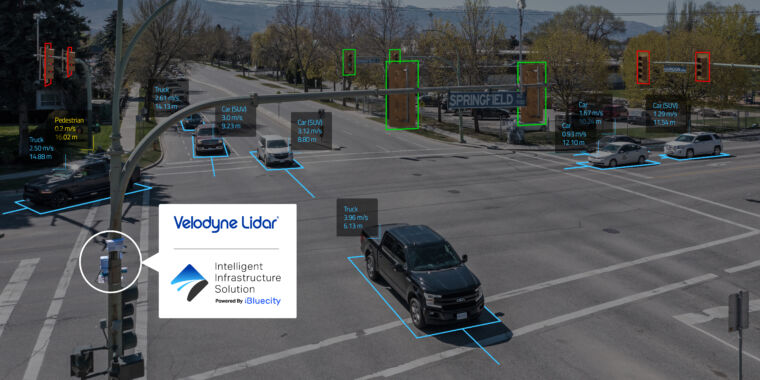 American roads have never been particularly safe compared to those of other countries. But the pandemic has made matters worse, with a shocking increase in crashes and fatalities of drivers and pedestrians in 2020 despite fewer miles being driven by Americans. Reducing this catastrophic accident rate is a goal of the autonomous vehicle industry, which often cites a (probably misleading) statistic that 94% of all fatal accidents are due to human error.

But some of the technology companies driving the AV revolution are also interested in improving the traffic infrastructure. On Wednesday, Velodyne Lidar announced that it will deploy a lidar-based traffic monitoring system at a dangerous intersection in Austin, Texas, as part of its smart infrastructure solution.

Velodyne will install lidar sensors to monitor traffic, beginning at the intersection of East 7th Street and Springdale Road. Velodyne’s story says this location’s accident and death risk, along with the prevalence of speeding and congestion, make it an ideal place to start.

“Lidar-based solutions have tremendous potential to protect personally identifiable information while continuing to help us achieve our Vision Zero goal of eliminating deaths and serious injuries on Austin’s roadways,” said Jason JonMichael, deputy director of the Austin Department of Transportation. “Velodyne Lidar’s smart infrastructure solution could allow us to more effectively collect and analyze the mobility needed to improve road efficiency and safety.”

Traffic Management and Signage – Town of Round Rock