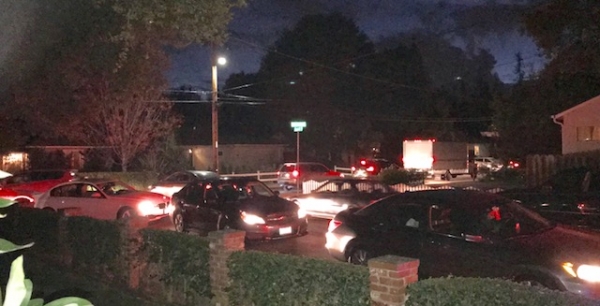 Traffic Willows: ‘No Thru Traffic’ signs up | News

In response to what one local called “carmageddon,” Menlo Park City Council authorized the erection of “No Thru Traffic” signs throughout the city’s Willows neighborhood on Nov. 15. The jury is still out on whether the panels help.

On November 20, Amar Murugan, a resident of Willows, said the installation of the signs appeared to help traffic on Baywood Avenue, while Brian Gilmer of O’Keefe Street said he thought it was still too early to tell. Arnold Way’s Ana Uribe-Ruiz said traffic hasn’t improved as signs aren’t enforced and new signals on Willow Road aren’t coordinated enough to keep traffic flowing.

If the signs work, it may be a glimmer of good news for local residents. But others worry that congestion will become the neighborhood’s “new normal.”

Mr. Gilmer told the council that the roar of traffic creates a great safety hazard. There are a lot of children living in the neighborhood and people don’t drive carefully when they’re angry they’re stuck trying to get home, he said.

“Someone is going to be affected,” he said. “It’s not an if, it’s a when.” When that happens, he said, emergency vehicles won’t be able to get to the scene because the roads are so congested.

Reports of significantly worsened traffic conditions increased the week beginning Nov. 6 after new signals were installed at the Willow Road/US 101 interchange. Residents on side streets near Willow Road said they were trapped in their alleys for hours.

The new traffic lights are part of the next phase of an interchange reconstruction project, which involves the removal of two freeway ramps. This reduces the number of cars that can enter the interchange, according to Caltrans spokesman Jeff Weiss. “There is no way to avoid this,” he said. Even after people adjust to new traffic conditions, there is not enough capacity at the interchange to rebuild it without causing delays in the meantime, he said.

Caltrans has just started Phase 2 of a four-phase project to rebuild the Willow Road/US 101 interchange. Construction phases 2 and 3 are expected to worsen traffic; they will take a year to complete, according to Angela Obeso, transportation engineer at Menlo Park.

Following a spike in traffic complaints on and near Willow Road, Menlo Park City Council voted 4-0, in the absence of Councilor Kirsten Keith, to post “No Thru Traffic” signs as soon as as possible, leaving it to the staff to decide where and how many should be installed.

Additionally, electronic signs will be added to Middlefield Road near Willow Road and along the Bayfront Expressway to alert drivers and recommend that they use alternate routes. At the Willow Road/US 101 interchange, paint and signage will be added to better direct traffic during construction, according to Obeso. Traffic lights along Willow Road, from Durham Street to Newbridge Street, will be coordinated so traffic can flow through the interchange more easily, she added. The Menlo Park Police Department also plans to send more officers and trained volunteers to help with traffic enforcement.

Staff installed temporary black and yellow “No Thru Traffic” signs within a day of council approval because the city already had some in stock, Deputy City Manager Chip Taylor said. Black and white or red and white panels have been ordered.

The panel colors are a bit confusing. Unlike yellow traffic signs, which serve as road warnings, the other color combinations generally signal legal applicability.

However, “No Thru Traffic” signs cannot be legally enforced. By state law, public roads can only be limited to a portion of drivers who live or have business there, Menlo Park Police Commander Dave Bertini told the council.

The misleading coloring of signs can create false expectations for residents that police will be able to enforce such measures, he said.

Such signs can also be official enough for apps like Waze to stop directing commuters to those neighborhoods, Taylor argued.

Council asked staff to study right-turn restrictions for traffic turning onto Willow Road from residential side streets. Such restrictions would be legally enforceable.

Council members requested that Caltrans help carry some of the burden. Four Caltrans representatives were present at the meeting. Councilman Ray Mueller asked Caltrans to consider designating the entire Willows neighborhood as a construction zone.

He pointed to a program that was implemented earlier this year in Atherton during a construction project to replace the drainage culvert along Marsh Road and install a steel barrier. During construction, residents and local businesses were given signs allowing them access, but all other traffic was prohibited.

The Willows, Ms. Obeso noted, is a much larger neighborhood with more entrances, and the project has a much longer duration than the Atherton project. Implementing such a program would likely be costly, she said.