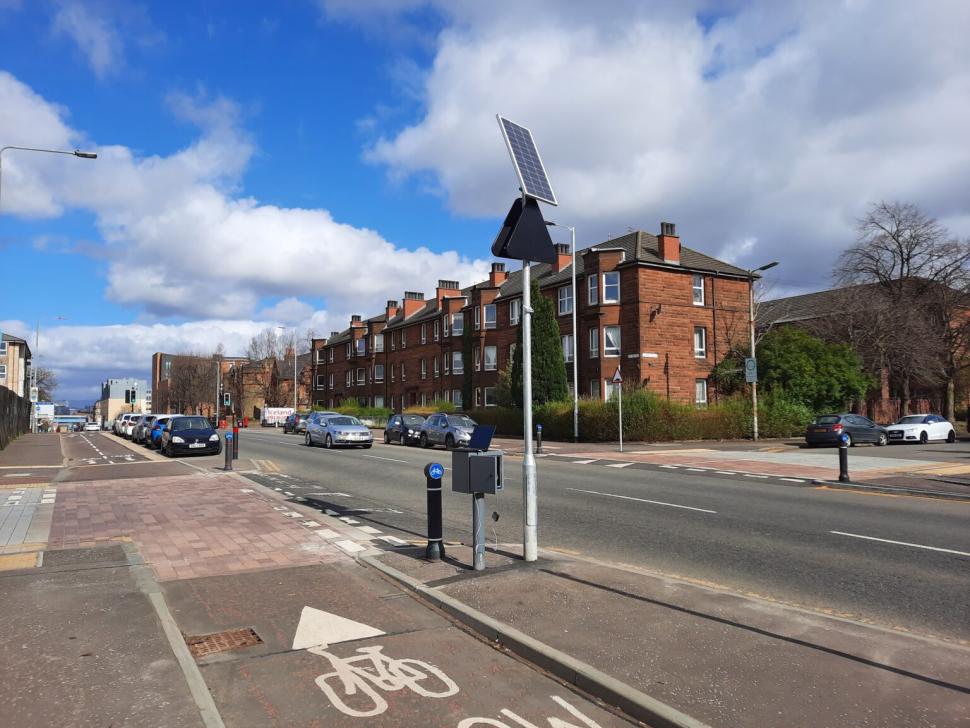 Conflicts between motor vehicles and bicycles have halved at a junction in Glasgow according to the first results of testing of bicycle-activated traffic warning signs expected to be deployed in Scotland’s largest city .

Q-Free, which announced a four-year partnership with Glasgow City Council to supply and install cycle detection equipment and related services, says its systems, which can have up to three panels and associated sensors, will be installed in 16 different locations. .

Interactive and personalized flashing signs warn drivers that cyclists are approaching an intersection or are in the cycle path ahead, where visibility may be obstructed by buildings or street furniture, and include control boxes powered by solar panels. The signs themselves are triggered by a cyclist passing over a sensor some 75 feet from the junction.

The sites were chosen based on historical collision data as well as their potential to reduce conflict between cyclists and other road users, and an initial test at a location with a history of such incidents passed them through. from 17% to 8% of while the percentage of motorists who did not give way to cyclists rose from 35% to 22%.

“A key objective of Glasgow City Council’s Cycling Strategic Plan is to create a vibrant city where cycling is accessible, safe and attractive to all,” she said. “Safety is seen as the biggest obstacle for people who cycle more frequently. Improving the safety of cyclists is therefore the cornerstone of our efforts to promote a transition to more sustainable modes of transport.

“We have worked closely with the Scottish team at Q-Free on an integrated system that prioritizes cyclists at level crossings. The success of this solution led to further partnership work and sharing of ideas. “

“Glasgow City Council was the first local authority in the UK to install bicycle-activated electronic signage on the road network,” she added. “We have since installed them at 16 other locations around the city to help improve safety for cyclists. “

According to the Glasgow Indicators Project, the number of cyclists to and from the city center increased 111% from 2009-2018, with an increase of 22% in the last year of this decade alone, and it it is likely that there will have been further growth as a result of the coronavirus pandemic.

“Cycling has become an integral part of the community as the downtown area becomes an increasingly attractive place to live, work and play, and we couldn’t be more excited to help the region protect its most vulnerable road users. “